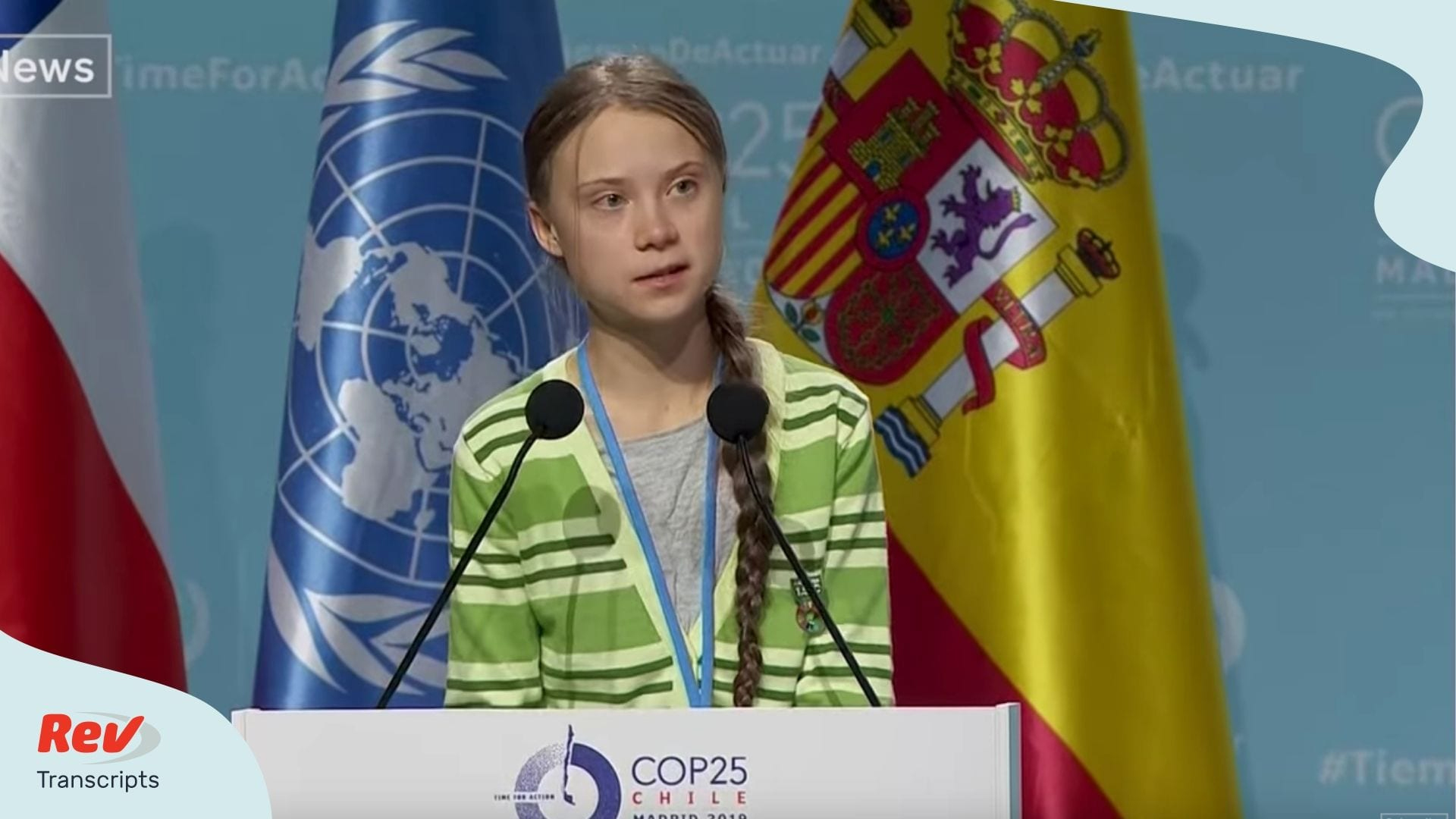 Hi. A year and a half ago, I didn’t speak to anyone unless I really had to, but then I found a reason to speak. Since then, I’ve given many speeches and learned that when you talk in public, you start with something personal or emotional to get everyone’s attention. Say things like, our house is on fire, I wanted to panic or how dare you.

But today I will not do that because then those phrases are all that people focus on. They don’t remember the facts, the very reason why I say those things in the first place, we no longer have time to leave out the science. For about a year I have been constantly talking about our rapidly declining carbon budgets over and over again. But since that is still being ignored, I will just keep repeating it.

In chapter two, on page 108 in the SR 1.5 IPCC report that came out last year, it says that if we ought to have a 6% to 7% chance of limiting the global temperature rise to below 1.5 degrees Celsius, we had on January 1, 2018, 420 gigatons of CO2 left two emit in that budget. And of course that number is much lower today as we emit about 42 gigatons of CO2 every year including land use.

With today’s emissions levels, that remaining budget will be gone within about eight years. These numbers aren’t anyone’s opinions or political views. This is the current best available science. Though many scientists suggest these figures or too moderate. These are the ones that have been accepted through the IPCC, and please note that these figures are global and therefore do not say anything about the aspect of equity, which is absolutely essential to make the Paris Agreement to work on a global scale.

That means that richer countries need to do their fair share and get down to real zero emissions much faster and then help poorer countries do the same, so people in less fortunate parts of the world can raise their living standards. These numbers also don’t include most feedback loops, nonlinear tipping points, or additional warming hidden by toxic air pollution.

Most models assume, however, that future generations will somehow be able to suck hundreds of billions of tons of CO2 out of the air with technologies that do not exist in the scale required and maybe never will. The approximate 6% to 7% chance budget is the one with the highest odds given by the IPCC. And now we have less than 340 gigatons of CO2 left to emit in that budget to share fairly.

Why is it so important to stay below 1.5 degrees? Because even at one degree people are dying from the climate crisis. Because that is what the United Science calls for to avoid destabilizing the climates. So that we have the best possible chance to avoid setting off irreversible chain reactions such as melting glaciers, polar ice and thawing Arctic permafrost. Every fraction of a degree matters. So there it is, again. This is my message. This is what I want you to focus on.

So please tell me, how do you react to these numbers without feeling at least some level of panic? How do you respond to the fact that basically nothing is being done about this without feeling the slightest bit of anger? And how do you communicate this without sounding alarmist? I would really like to know. Since the Paris Agreement, global banks have invested 1.9 trillion U.S. dollars in fossil fuels. One hundred companies are responsible for 71% of global emissions. The G20 countries account for almost 80% of total emissions. The richest 10% of the world’s population produce half of our CO2 emissions, while the poorest 50% account for just one tenth. We indeed have some work to do, but some more than others.

Recently, a handful of rich countries pledged to reduce their emissions of greenhouse gases by so-and-so many percent by this or that date or to become climate neutral or net zero in so-and-so many years. This may sound impressive at first glance, but even though the intentions may be good, this is not leadership. This is not leading. This is misleading because most of these pledges do not include aviation, shipping, and imported and exported goods and consumption. They do, however, include the possibility of countries to offset their emissions elsewhere.

These pledges don’t include the immediate yearly reduction rates needed for wealthy countries, which is necessary to stay within the remaining tiny budget. Zero in 2050 means nothing, if high emission continues even for a few years, then the remaining budget will be gone. Without seeing the full picture, we will not solve this crisis. Finding holistic solutions is what the cup should be all about, but instead it seems to have turned into some kind of opportunity for countries to negotiate loopholes and to avoid raising their ambition.

Countries are finding clever ways around having to take real action. Like double counting emissions reductions and moving their emissions overseas and walking back on their promises to increase ambition or refusing to pay for solutions or loss of damage. This has to stop. What we need is real drastic emission cuts at the source, but of course just reducing emissions is not enough. Our greenhouse gas emissions has to stop. To stay below 1.5 degrees. We need to keep the carbon in the ground. Only setting up distant dates and saying things which give the impression of the action is underway will most likely do more harm than good because the changes required are still nowhere in site. The politics needed does not exist today despite what you might hear from world leaders. And I still believe that the biggest danger is not inaction. The real danger is when politicians and CEOs are making it look like real action is happening when in fact almost nothing is being done apart from clever accounting and creative PR.

I have been fortunate enough to be able to travel around the world. And my experience is that the lack of awareness is the same everywhere, not the least amongst those elected to lead us. There is no sense of urgency whatsoever. Our leaders are not behaving as if we were in an emergency. In an emergency you change your behavior. If there is a child standing in the middle of the road and cars are coming at full speed, you don’t look away because it’s too uncomfortable. You immediately run out and rescue that child. And without that sense of urgency, how can we, the people understand that we are facing a real crisis. And if the people are not fully aware of what is going on, then they will not put pressure on the people in power to act. And without pressure from the people our leaders can get away with basically not doing anything, which is where we are now. And around and around it goes.

In just three weeks. We will enter a new decade, a decade that will define our future. Right now we are desperate for any sign of hope. Well, I’m telling you, there is hope. I have seen it, but it does not come from the governments or corporations. It comes from the people. The people who have been unaware, but are now starting to wake up. And once we become aware, we change. People can change. People are ready for change. And that is the hope because we have democracy and democracy is happening all the time. Not just on election day, but every second and every hour. It is public opinion that runs the free world. In fact, every great change throughout history has come from the people. We do not have to wait. We can start the change right now. We the people. Thank you. 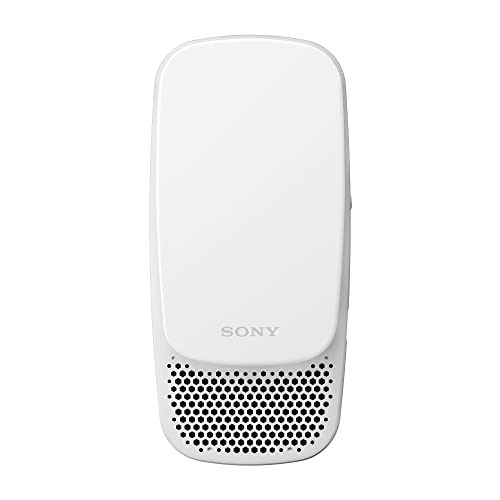